Who is Neil Chadwick?

When I was 13 years old, my father realized and understood that I was getting the “car bug.” He told me there were 3 things that I had to know how to do before driving the car: 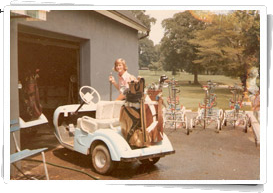 At 13 years old, I began cleaning his car. I waxed his car and learned very quickly not to use the whole can. From that point, I literally cleaned dad’s car every week. I started cleaning cars of relatives, friends, and neighbors (1965).

In spring of 1967, a friend of mine got me an opportunity to caddy. Because I was new, I was seldom one of the first picks. I would have to be at the course very early and sometimes would not even get out. Carrying huge golf bags and walking 18 holes; I would be lucky to make $15-$18, so the plan evolved.

Electric carts starting becoming more popular. There were soon more carts than caddies. The carts were stored in a barn near the course. The barn was nearly empty for 5 or 6 hours a day. I got the idea to take cars into the barn to clean them.

After receiving permission from the caddy master, I began cleaning members cars. I started cleaning more and more cars each weekend. For four solid springs and summers at the country club, that is all I did. I was completely booked each weekend, every summer. I became more familiar with different situations and the preparation required getting each car cleaned properly.

After high school graduation, in 1972, I played some professional hockey but stopped in 1974. Instead, I went to the University of Tampa and reestablished my business as a way to make money. I not only worked on the professor’s vehicles, but also students. However, I was not at a professional level that satisfied me. The work was all by hand, no machines or equipment to achieve optimum results.

I had a big awakening in 1975. I heard that there was a guy that could make a car look brand new regardless of its condition. I thought I was pretty good, but I knew in my heart there was another level. I figured the best way to see what was going on was to take my car there and make an appointment. 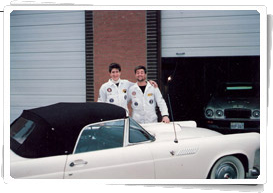 This master used a buffer and definitely knew what he was doing. His products were totally different than what I had been using, and I was absolutely blown away with the final job. He offered to let me hang out and to show me his impressive full detailing process.

He used a high speed buffer and lambs wool pads. This is a very risky way to take care of the car if you didn’t know what you were doing, but I quickly learned the professional way to use the equipment for the best and most effective results.

In 1975, I started doing business with used car dealers using my new and proven skills. I would clean the trade-ins; exterior, interior, engine bay, etc. Over the next 10 years, I had a mixture of commercial and retail business. In 1984, I moved to Norfolk, VA and opened a retail detailing and reconditioning facility; Chadwick’s Cosmetic Car Care Inc. This was the only one of its kind in the state of Virginia.

At the peak of my business in Virginia, in the 1980’s, I had 4 full time employees and I did a lot of work for National Car Rental. I reconditioned every single car that went through their rental facility before it was ready to be resold. I successfully held the account for 8 years without as much as a written contract.

In 1991, I went to a much smaller, more specialized, business plan. I started taking care of private collections of classic and exotic cars. I worked with clients one on one instead of using a fixed location and therefore, I could concentrate on specific and personalized service.

In 2004 I relocated to the Palm Beach Florida area to have access to some of the finest cars & collections. I developed a loyal & devoted following & also became the exclusive detailer for Lamborghini Palm Beach. Since 2009 I have been developing & perfecting the Chadwick’s Triple Play System with over $15 Billion worth of cars Chadwick’d to date.